One way to avoid the problems with lack of feedback between server and the app would be to shift from using a counter that is increasing with every authentication attempt to a counter based on, for example, a time stamp. This is what TOTP is actually doing.

TOTP works almost identically to HOTP. It’s calculating HMAC-SHA-1 using the key and a Big Endian representation of a counter, but the counter is based off of UNIX timestamp. And then is generating the code off of the resulting hash the same way as in HOTP.

UNIX timestamp is nothing more than a number of seconds that have elapsed since the midnight on Jan 1st, 1970 UTC. It’s a large unsigned integer that is being incremented by 1 every second.

And from this point on we proceed exactly as in HOTP, the difference being we give the above array as input to HMAC-SHA-1, instead of Big-endian-ordered table with the counter.

A bit of code

First off, if you want to validate the Python code below works properly, add new key to your Authenticator app (e.g. Google Authenticator): 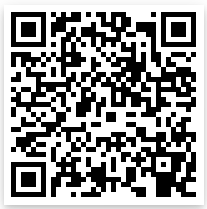 and compare the results.

I will explain the details around the QR Codes later in this article. But for now, suffice it to say, the code above contains our super-secret key: $3cr3tP4$$. The full text the QR Code above resolves to:

Just as the reminder, the value of secret argument above is a Base32 encoded key. In other words $3cr3tP4$$ encoded in Base32 is EQZWG4RTORIDIJBE. You can double-check that by googling out an online Base32 encoding/decoding tool and trying out yourself. And also later in this article I’ll get into more details on Base32. I’ll also walk through encoding and decoding our password.

Another important thing is that if you want the Python code below to yield the correct codes, you must make sure your system’s clock is set correctly! The easiest way on Linux is to use NTP. That’s what I’m using.

Alright, let’s get to the actual Python code:

Sample output of the script:

You can use any of the available QR Code scanners to scan the following code: You’ll see that it decodes to the following text string:

In that string are all the details needed for an app to start generating codes. It’s in a URI (Uniform Resource Identifier) format. For both, HOTP, and TOTP the scheme is always otpauth://. Next we have authority, which is always either hotp or totp. Path is the account info (e.g. login/email address etc.). Next we have a couple of parameters. The most important one is secret. It contains a Base32-encoded key. And issuer contains an info about the account provider (e.g. GMail/GitHub etc.).

It’s important to note that the email and the value of issuer aren’t really important. They’re just helpers for the Authenticator app so that it can add some meaningful data to the GUI alongside the codes. Like for which of your online accounts is the code being generated for. The app is free to use/disregard those as it pleases.

For example (digression here), together with my Librem 13 I got a USB key, LibremKey, capable of performing both, HOTP, and TOTP. This key is based off of Nitrokey Pro2. With the newest version of libnitrokey (3.6) you’d be able to use nitrokey-app to manage both, HOTP, and TOTP also on LibremKey. However, this app lacks the capability to scan QR Codes. You’d have to be able to know the key (e.g. fish it out from the QR Code yourself) if you wanted to add it to your USB key. Since there are a couple of reasons I really like NitroKeys:

my wife and I decided to write a simple TOTP authenticator app for desktop, Nitrokey Authenticator, that’s capable of scanning QR Codes and works with Nitrokey Pro2. Will also work with LibremKey once you have libnitrokey 3.6.

Quick note: we didn’t make it in time to ship libnitrokey 3.6 in Bullseye, but it’ll land in testing shortly after Bullseye’s release. I also missed the boat on releasing Nitrokey Authenticator in Bullseye. It already is in Debian Testing, though.

Anyway, as I’ve said it’s up to the authenticator app to decide how it’s going to use the metadata information from the code. For example, our Nitrokey Authenticator, when adding new key by scanning the QR Code, is presenting a dialog window where you can name your new TOTP key slot. We’re prefilling it with the value of the issuer argument withing the URI, and we completely omit – at least right now – the account info (the email address in the above URI): 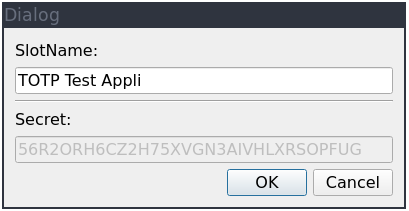 If you’re wondering why the Slot Name is truncated, that’s due to NitroKey’s hardware limitation of the slot name being not longer than 15 characters.

Now, as I’ve said, the most important part is the secret. You can see it in both, the URI and – greyed-out – in the dialog window. This is the key that the app is passing to HMAC-SHA-1 when generating codes!! You can see that the key is here comprised of only printable ASCII characters. I’ve mentioned Base32 in the code section above, but let me explain in more details here. Since both, HOTP, and TOTP are using URI to store all the data, anything that is part of URI has to be one of URI-safe characters, which is a small subset of the printable ASCII characters. Therefore, the binary key has to be encoded somehow, so that it’s URI-safe. Because of that, HOTP, and TOTP both use Base32.

Base32 is similar to much more popular Base64. The latter is used to encode binary data in a printable format, so that you can for example copy-paste it to your email, or on your website. Base64 is designed to use only printable characters because of that. Base32 is not only comprised of printable characters, but only of characters that can safely be put as part of and URI (e.g. any URL). The downside is the overhead of Base32 is even bigger than Base64. In other words, data encoded with Base32 will be longer than its Base64-encoded counterpart.

Base32 is using only upper-case letters: A-Z and digits: 2-7. Digits 0,1 are omitted because of their similarity to O,I (capital o and capital i). This gives us 26 letters + 6 digits = 32 distinct characters – thus the name. Similarly, Base64 is using 64 distinct characters.

Anyway, in Base32 we use bi-directional mapping of integer values to/from the above sets of characters:

Let’s walk thru encoding our password/key: $3cr3tP4$$ using Base32.

And there you have it – the result, Base32 encoded string of our password, is EQZWG4RTORIDIJBE.

You literally just reverse the process.

If our password was, for example, 2 bytes long – just for simplicity of explaining here – we’d have 16 bits. That would be 3 full 5-bits long integers and we’d be left with single (16th) bit. What should we do with that? Even though Base32 standard mentions padding using 33rd character: =, TOTP apps are just ignoring leftovers. In particular, when encoding, they’re just padding the string of ones and zeros with zeros to the nearest full 5-bits long int, and using that to construct the last Base32 Character. When decoding, you’d be left with some zeros that don’t add up to the full byte (less than 8 zeros) – you’d ignore them (cut them off), too.

Again, not to make this post too long, I’m not going to present any code for Base32 here. But if you’d like to see a simple implementation of it, check out our code within Nitrokey Authenticator. In particular, here is where we’re filling up with 0 to fill-up to the full 5-bits long int when encoding. And here is where we’re cutting off leftover zeros, when decoding Base32.

From the above explanation you’ve probably already gathered – everything one would ever need to generate the codes on your behalf would be to get their hands on the secret arg of the QR Code! Even worse – they don’t even have to be technical. All they would have to do is install Google Authenticator on their phone, run it and scan your QR Code. They’re in.

If you lose access to your TOTP – maybe your phone got stolen, damaged, or otherwise rendered useless – then you have to recover somehow. Maybe the account, you’re using offers recovery codes. Maybe resetting password will be enough – it would likely reset password together with 2FA. But if none of those would be an option, you’d be cut off from your account.

Best take a screenshot of your QR Code and store it offline (e.g. on a flash drive).

Hope that cycle of articles explains how simple and elegant both, HOTP, and TOTP algorithms are. Originally I planned 2 articles on that, but turned out, there was more to say about the topic than I originally thought.

I hope I was able to explain this in an easy and approachable fashion. If you have any feedback, don’t hesitate to email me.